The Revenge Against the Commons

Yves here. Get a cup of coffee. This story is wild. And recall that Occupy Wall Street (admittedly much smaller encampments, and inherently not even close to self-contained or self-supporting) was rousted in a coordinated 17-city paramilitary crackdown over one night.

By Zad Forever, a collectively authored English language blog bringing together dispatches from la zad of Notre Dame de Landes, France, a liberated territory against an airport and its world. The land has been occupied since 2009 and is part of a 50 year struggle ‘against a major capitalist infrastructure project. Originally published (with more photos) at Zad Forever; cross posted  from OpenDemocracy 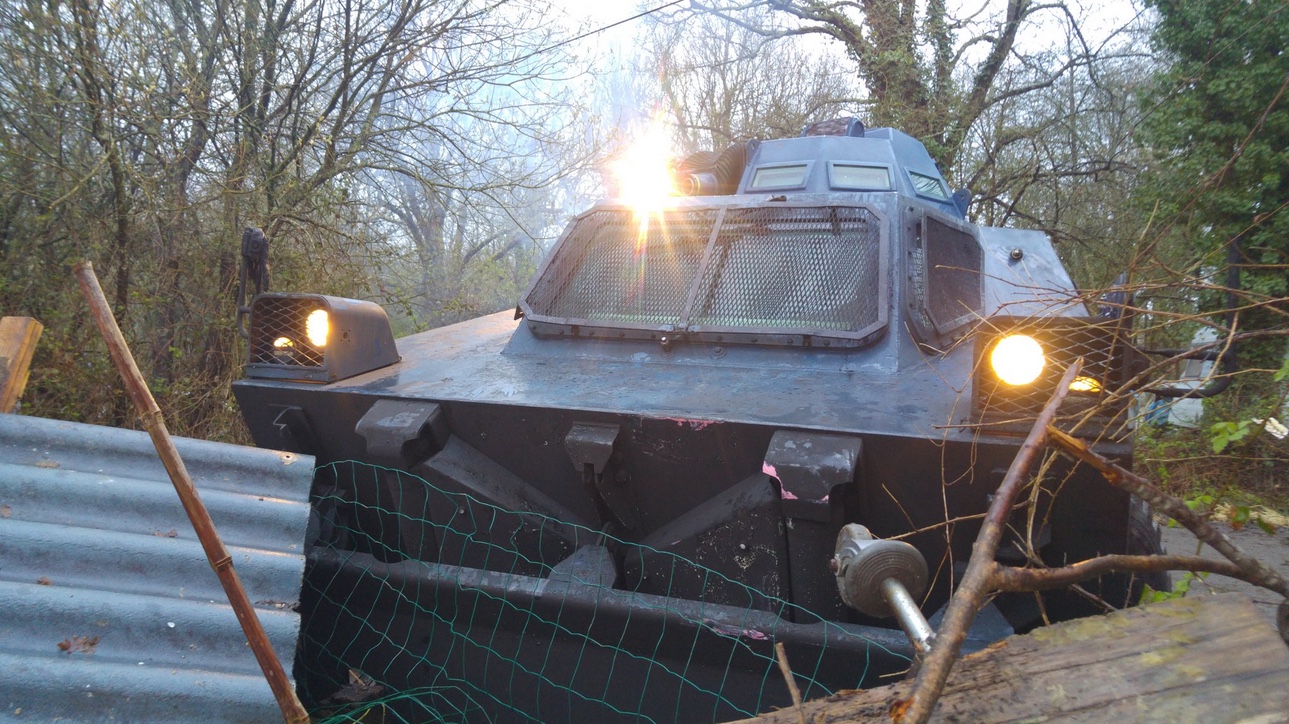 This is a long read by one of the inhabitants of the Zad, about the fortnight rollercoaster of rural riots that has just taken place to evict the liberated territory of the zad. It’s been incredibly intense and hard to find a moment to write, but we did our best. This is simply one viewpoint, there are over 1000 people on the zone at the moment and every one of them could tell a different story. Thank you for all the friends and comrades who helped by sharing their stories, rebel spirits and lemon juice against the tear gas.

“We must bring into being the world we want to defend. These cracks where people find each other to build a beautiful future are important. This is how the zad is a model.” Naomi Klein

The police helicopter hovers above, its bone rattling clattering never seems to stop. At night its long godlike finger of light penetrates our cabins and farm houses. It has been so hard to sleep this last week. Even dreaming, it seems, is a crime on the zad. And that’s the point: these 4000 acres of autonomous territory, this zone to defend, has existed despite the state and capitalism for nearly a decade and no government can allow such a place to flourish. All territories that are inhabited by people who bridge the gap between dream and action have to be crushed before their hope begins to spread. This is why France’s biggest police operation since May 1968, at a cost of 400,000 euros a day, has been trying to evict us with its 2500 gendarmes, armoured vehicles (APCs), bulldozers, rubber bullets, drones, 200 cameras and 11,000 tear gas and stun grenades fired since the operation began at 3.20am on the morning of the 9th of April.

The state said that these would be “targeted evictions”, claiming that there were up to 80 ‘radical’ zadists that would be hunted down, and that the rest, the ‘good’ zadists, would have to legalise or face the same fate. The good zadist was a caricature of the gentle ‘neo rural farmer’ returning to the land, the bad, an ultra violent revolutionary, just there to make trouble. Of course this was a fantasy vision to feed the state’s primary strategy, to divide this diverse popular movement that has managed to defeat 3 different French governments and win France’s biggest political victory of a generation.

The zad was initially set up as a protest against the building of a new airport for the city of Nantes, following a letter by residents distributed during a climate camp in 2009, which invited people to squat the land and buildings: ‘because’ as they wrote ‘only an inhabited territory can be defended’. Over the years this territory earmarked for a mega infrastructure project, evolved into Europe’s largest laboratory of commoning. Before the French state started to bulldoze our homes, there were 70 different living spaces and 300 inhabitants nestled into this checkerboard landscape of forest, fields and wetlands. Alternative ways of living with each other, fellow species and the world are experimented with 24/7.

From making our own bread to running a pirate radio station, planting herbal medicine gardens to making rebel camembert, a rap recording studio to a pasta production workshop, an artisanal brewery to two blacksmiths forges, a communal justice system to a library and even a full scale working lighthouse – the zad has become a new commune for the 21st century. Messy and bemusing, this beautifully imperfect utopia in resistance against an airport and its world has been supported by a radically diverse popular movement, bringing together tens of thousands of anarchists and farmers, unionists and naturalists, environmentalists and students, locals and revolutionaries of every flavour. But everything changed on the 17th of January 2018, when the French prime minister appeared on TV to cancel the airport project and in the same breath say that the zad, the ‘outlaw zone’ would be evicted and law and order returned.

I am starting to write 8 days into the attack, it’s Tuesday the 17th of April my diary tells me, but days, dates even hours of the day seem to merge into a muddled bath of adrenaline socked intensity, so hard to capture with words. We are so tired, bruised and many badly injured. Medics have counted 270 injuries so far. Lots due to the impact of rubber bullets, but most from the sharp metal and plastic shrapnel shot from the stun and concussion grenades whose explosions punctuate the spring symphony of birdsong. Similar grenades killed 21 year old ecological activist Remi Fraise during protests against an agro industrial damn in 2014.

The zad’s welcome and information centre, still dominated by a huge hand painted map of the zone, has been transformed into a field hospital. Local doctors have come in solidarity working with action medic crews, volunteer acupuncturists and healers of all sorts and the comrades ambulance is parked outside. The police have even delayed ambulances leaving the zone with injured people in them, and when its the gendarmerie that evacuates seriously injured protesters from the area sometimes they have been abandoning them in the street far from the hospital or in one case in front of a psychiatric clinic.

The thousands of acts of solidarity have been a life line for us, including sabotaged French consulate parkings in Munich to local pensioners bringing chocolate bars, musicians sending in songs they composed to demonstrations by Zapatistas in Chiapas, banners in front of French embassies everywhere – from Dehli to New York, a giant message carved in the sand of a New Zealand beach and even scuba divers with an underwater banner. Here on the zone three activist field kitchens have come to feed us, architects have written a column deploring the destruction of unique forms of habitat signed by 50,000 people and locals have been offering storage for the safe keeping of our belongings.

A true culture of resistance has evolved in parallel with the zad over the years. Not many people are psychologically or physically prepared to fight on the barricades, but thousands are ready to give material support in all its forms and this is the foundation of any struggle that wants to win. It means opening up to those who might be different, those that might not have the same revolutionary analysis as us, those who some put in their box named ‘reformist’, but this is what building a composition is all about, it is how we weave a true ecology of resistance. As a banner reads on one of the squatted farmhouses here, Pas de barricadieres sans cuisiniers “There are no (female) barricaders without (male) cooks.”

Today has been one of the calmest since the start of the operation, and it felt like the springtime was really flowering, so we opened all the doors and windows of house letting the spring air push away the toxic fumes of tear gas that still linger on our clothes. It feels like there is a momentary lull. For the first time since the evictions, our collective all ate together, sitting in the sun at a long table surrounded by two dozen friends from across the world come to support us. I hear the buzzing of a bee trying to find nectar and look up into the sky, its not a bee at all, but the police drone, come to film us sharing food, it hovers for hours. In the end this is the greatest crime we have committed on the zad, that of building the commons, sharing worlds together and deserting the pathology of individualism.

Two years before the abandonment of the airport project the movement declared in a text entitled The Six Points for the Zad: Because there will be no Airport, that we would, via an entity that emerged from the movement , collectively look after these lands that we were saving from certain death by concrete. A few months before the abandonment the form that this entity took was the Assembly of Usages. Soon after thethe airport was cancelled, we entered into negotiations with the state (via the prefet. Nicole Klein, who represents the state in the department) following a complicated week of pre-negotiations, where we were forced to open up one of the roads which had had cabins built on it since the attempted evictions of 2012. It seemed that the flow of traffic through the zone was the state’s way of telling the public that law and order had returned on the zone. (see the text Zad Will Survive for a view of this complicated period).

A united delegation of 11 people made up from the NGOs, farmers, naturalists and occupiers of the zone attended the negotiations and did not flinch from the demand to set up a collective legal land structure, rather than return these lands